If you wish, you can allow SuperWEB2 users to save tables and custom data that are accessible to other SuperWEB2 users. To use this feature, you need to create folders in SuperADMIN, and set permissions on those folders to control who can access the folders.

You can also use SuperADMIN to upload and manage tables in shared folders.

To create a new folder in SuperADMIN, use the cat command.

For example, the following command creates a new folder with the ID sharedfolder in the top level of the dataset catalogue:

The display name for this folder has been set to Shared User Tables. This display name will appear in SuperWEB2 when users are saving and loading tables and custom data from this folder. For example: 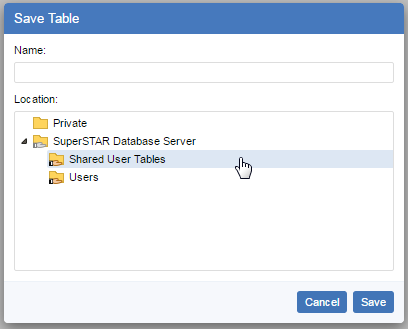 Once you have created a folder, you will need to set permissions to control who can access this folder:

Folder permissions work in conjunction with dataset permissions, so users will only be able to access saved tables or custom data if they also have access to the corresponding dataset.

For example, the following command gives the user jsmith permission to load tables and custom data that have been saved to the Shared User Tables folder by other users:

You can also use SuperADMIN to upload a saved TXD to the catalogue, as well as view and manage tables that have been saved by users from inside SuperWEB2.

Use the cat command to upload and manage saved tables.

Upload a Saved Table to the Catalogue

Note when SuperADMIN and SuperWEB2 are Running Separately

If SuperADMIN and SuperWEB2 are running on different machines, then you need to ensure that SuperADMIN has been configured so that it can locate the correct SuperWEB2 instance when uploading the table. If you receive an error message similar to the following, SuperADMIN is not configured correctly:

To resolve this, you can either:

Move a Table between Folders

To move a table to the root folder, use root as the <folder_id>. For example:

You can also use the cat command to check which tables are in a particular folder:

You can omit the folder ID if you want to get a list of tables in the root folder.

You can delete a table from the repository using the following command:

You can use this command to delete tables you have uploaded, as well as tables that have been added by SuperWEB2 users. Tables created within SuperWEB2 are automatically assigned an ID. You can find out what this is using the cat [ <folder_id> ] tables command.

Use the following command to rename a table in the repository:

This command changes the name that is displayed to users in SuperWEB2.

Note about Deleting Folders and Reuse of Folder IDs

There is currently a known issue relating to what happens when a folder is deleted: although any tables that were in the folder at the time of deletion will no longer be accessible to SuperWEB2 users, the table definitions will remain in the user data repository database.

If you subsequently create another folder with the same ID as the deleted folder, the tables from the previous folder may become available again in SuperWEB2.

This issue will be resolved in a future release.